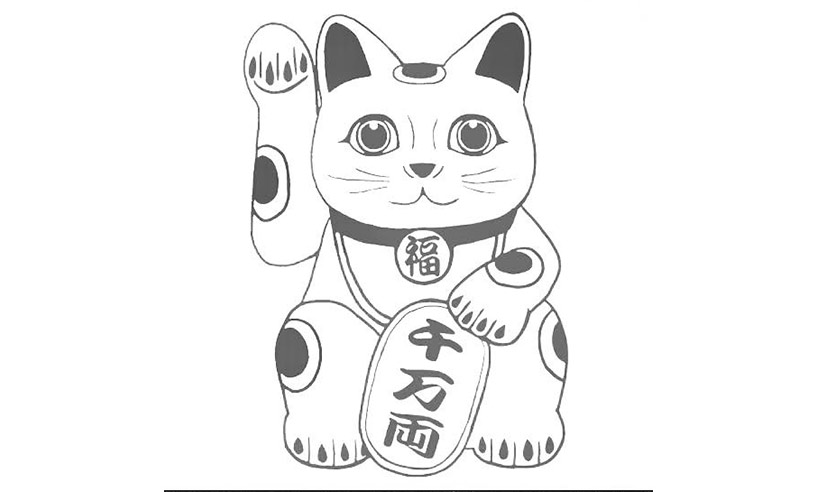 If you have ever entered a Japanese or Chinese restaurant or gift shop at some point, you have probably spotted a Maneki Neko statue at some point. This is a popular Asian mythological creature commonly referred to in the west as the lucky cat.

The Maneki Neko is a popular choice for those looking for a fun mythical ink work promising good luck and enriched life. If you have strong ties to the Asian culture or you simply want a tattoo to wear for luck the Maneki Neko and its lucky paw may be an ideal choice for you.

What’s even more interesting are the origin stories of these legendry figures. There are many of them in both Japanese and Chinese culture since both cultures try to claim this creature as theirs. However, the more popular consensus is that the lucky cat is predominantly of Japanese origin but it does have elements and imagery from Chinese folklore.

Of the many origin stories for this mythical creature, two stories stand out both in popularity and in their explanation of the Maneki Neko’s nature. The first story is a more gruesome one about a geisha’s adorable cat that continually clawed at her kimono. Worn out by the cat’s persistent unexplainable disturbance, the Geisha concluded it was possessed and asked that the cat’s head be cut off.

But when the cat’s head was cut off, the head went flying up to the ceiling and dug its teeth into a snake that had been waiting all along to attack its owner. Hence the cat’s heroics was discovered only after its death and a statue was made in its honor. This particular origin story explains the cat’s paw being held up depicting how it was scratching the Geisha’s kimono.

The other origin story is a lot less gruesome. In this case, a man was said to be standing under a tree during a storm. He spotted a cat outside a temple nearby beckoning to him. When the man left where he was standing on the tree to follow the cat into the temple, the tree was struck by lightning. The grateful man had a statue of the car made in its honor after it passed away years later.

These two stories explain the Maneki Neko’s reputation as a bringer of good luck and a protector. It is a helpful creature to have around which is why it is such a popular tattoo choice.

As a tattoo, the Maneki Neko can be customized based on your preferences and to imply various meanings. For instance, a lucky cat with a right paw raised is believed to attract money and good fortune and one with the left paw up will attract more customers. You may even choose to have both paws up.

Another feature of this tattoo that is commonly varied is the eye. A closed eye means the cat will bring you luck very soon but an open eye means it will bring you luck later in the future. The Maneki Neko may also be drawn in various colors each with a distinct meaning. For instance, while the traditional calico coloring is for luck, Red is for health, while gold is for prosperity or wealth.

Since it is not a religious figure, you don’t have to stick to a specific design for the Maneki Neko. Feel free to have fun with your tattoo artist in creating inkwork that suits you best and matches what you want for your life at the moment. But this tattoo would look best in the traditional Japanese style which is why it is best to see the best Japanese tattoo artists in our tattoo parlor in Perth. If you are thinking of getting a Maneki Neko tattoo, you might as well have it drawn by the best tattoo artist in Perth. Visit Primitive Tattoo for this or any other ancient Japanese tattoo of your choice.