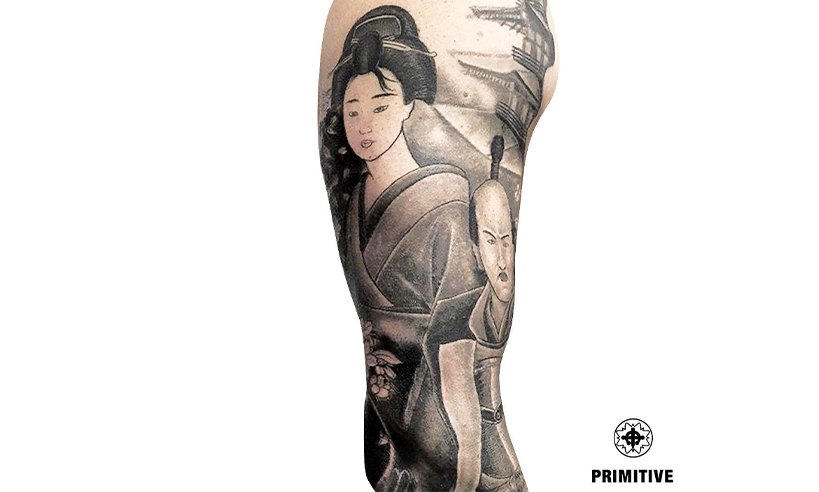 The Geisha tattoo is perhaps one of the more unique tattoos you can get, especially because it is often misunderstood as being a woman of the night. However, the Geisha is a lot more than just a prostitute. The Gisha symbolizes beauty, seduction and attraction. In Japan and as part of traditional Japanese tattooing practices, the Geisha tattoo is sported by both men and women alike.

The traditional geisha tattoo design generally depicts a woman with a mysterious expression. While it is a symbol of a beautiful woman, who is perfectly mannered and dressed, it is also a show of real feminine beauty. It especially highlights beauty when depicted with flowers and motifs.

The use of motifs and patterns in the tattoo makes them extremely versatile. The use of brown and black, with the geisha downing an umbrella is some of the most popular tattoos.

Traditionally, getting a geisha tattoo was a way of showing that you appreciated beauty, were well mannered, but there was an air of mystery around you. Today these well-done tattoos are enjoyed by westerners just as they are by people in Japan.

To be a successful geisha, she had to ensure that there was an air of mystery and an overall allure which made men come to them. Generally, it would be a petite woman wearing a mask, with black hair. Though Geishas dressed in bright colors, she was touted as the epitome of beauty. She entertained men with dances, jokes and massages. That’s why the geisha tattoo means a lot more than just a symbol of prostitution. It is unfortunate that a one-dimensional view of the Geisha has become mainstream. Though people who get the geisha tattoo understand its true nature.