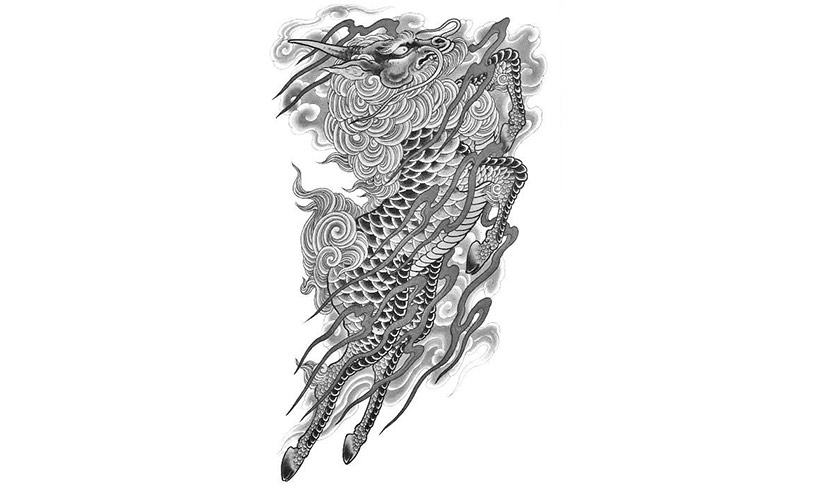 One of the very interesting but lesser-known Asian mythological characters is the Kirin. This mythological creature and its numerous depictions have been around for years in ancient folklore and is often associated with various Asian culture from Japan, to China, Vietnam, Taiwan, and even Korea.

The Kirin is commonly referred to as the Japanese Unicorn due to its physical resemblance to the unicorn in some depictions. It has a single horn on its head like a unicorn. However, it’s usually depicted as a creature with the body of a deer covered with dragon scales. Other notable features may include the prominent long flowing hair and the oxtail. Some depictions also portray the Kirin with feathers with close resemblance to a Pheonix in this case.

But more than its interesting appearances, it is the nature of the Kirin that accounts for its popularity. Unlike other mythological tattoo creatures that are known for their fierce nature and fiery appearances, the Kirin’s allure is in the serene feelings it creates. This mythical creature is not associated with weakness but with gentleness from which it draws its divine strength.

The symbolism of the Kirin Tattoo can mean different things to people. In ancient folklore, the appearance of the Kirin is commonly associated with the appointment of a new leader as a symbol of a peaceful and blissful transition. Therefore, some people may get this tattoo during a major transitional period of their lives.

The Kirin is also commonly associated with some lifestyles nowadays. For instance, because the Kirin does not feed on flesh and it does not harm other living things, a Kirin tattoo may be a perfect tattoo choice for a vegan lifestyle.

The Kirin is also notable for having a special relationship with the planet. A common belief about this mythical creature is that it does not walk on the grass so as not to destroy it. Rather it chooses to glide through the clouds. And even when it walks on grass, it does so gently in a way that barely affects the grass. This makes a Kirin tattoo a great choice for environmentalists or those making a transition from a lifestyle of violence.

Generally, this mythical creature is known for peace, serenity, and kindness which are great feelings to be associated with. It is commonly drawn as a large piece, striking a dynamic pose, and maybe customized in bright and striking colors such as Cyan or Red.

There are various ways to portray the Kirin Tattoo. You can speak with your Tattoo artist to find the right one for you and discuss where it will be placed for the best effects. Visit our tattoo parlor in Perth to speak with the best Japanese tattoo artists for the perfect Kirin tattoo.