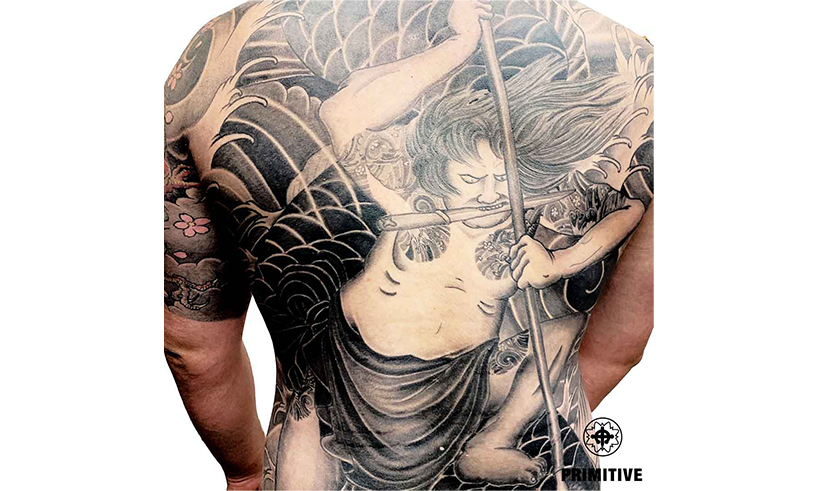 Interestingly the legend of Kintaro happens to be based on actual historical military history, which dates back to the 10th century. The legend is also linked to the koi, which is a Japanese carp, and they happen to be part of an annual celebration called Boys’ Day.

Kintaro had enormous strength even as a child, and so managed to subdue a large koi, which too is a symbol of strength. On this special day, most Japanese families will fly the koi flag and will wish that their children be like Kintaro, i.e. courageous, bold and strong.

In traditional Japanese tattoos, the Kintaro is often tattooed with a koi. It seems as both the Koi and Kintaro are intertwined, in what is a symbol of immense strength. People who get this tattoo are showing that either they are strong or are willing to do what it takes to achieve their goals. In other words, they will subdue the most dangerous opponent if need be.

The pagoda is a very important structure and is also a symbol. These are shrines that house relics, some of which are immensely powerful and important. A samurai with a Pagoda tattoo symbolizes the guardian or in other words, a protector.

Samurai In Combat
A tattoo which features a samurai in combat or maybe preparing for it is reflective of skill and courage. Generally, the tattoos will depict the samurai carrying a weapon like a large spear, a katana or a large bow. It is often a symbol of being combat-ready and bold. That’s why it was amongst the most tattooed symbols by yakuza gang members.